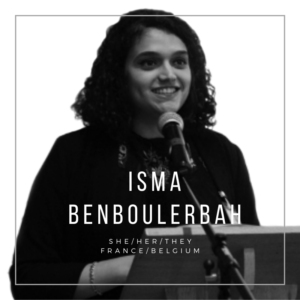 Isma Benboulerbah is a strong and passionate feminist activist and has been working for years on programs focusing on fight sexual and gender-based violence and SRHR.

Isma is currently working as programmes officer at the End FGM European Network, where she also coordinates community development and youth programmes to end violence against women and girls.

Previously, Isma worked in on the project “Building bridges between Europe and Africa to end FGM” and was also elected board member and acted as Secretary General of the French network against FGM Excision Parlons-en! Isma also collaborated with the World Health Organisation for a research on youth and adolescent sexual health in West Africa.

After several years of professional experience in France, West Africa and with women from the Arab-Muslim diaspora and FGM-affected communities in Europe, Isma has built up important knowledge on sexual and reproductive rights, gender-based violence, harmful traditional practices around the bodies of girls and women, and particularly on female genital mutilation.

YouAct would like to take this occasion to warmly welcome Isma to our network and to thank one more time our former Coordinator Adriana Pereira for the incredible work done over the past two years.