Home/Uncategorized/Experiencing the Sofia Pride
Previous Next

This article is written by Eimear Sparks, YouAct member from Ireland, currently undertaking a fellowship at the PETRI Center in Sofia and presents her own experience, views and opinions. 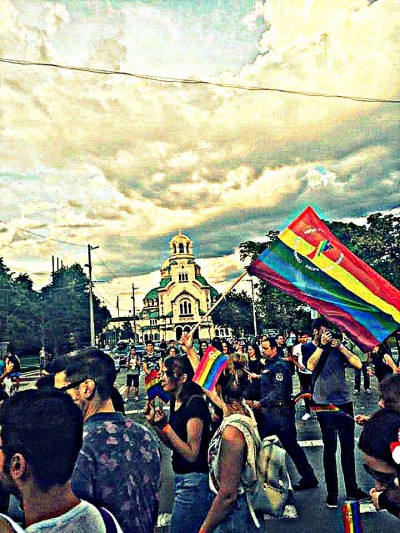 The first I heard about the Sofia Pride came in the form of an email from the organisation AllOut, which had sent out a petition collecting signatures in order to persuade the Mayor of Sofia to attend the parade and in doing so, to show her solidarity with the LGBTQI+ community of Bulgaria and her condemnation of the pride counter-demonstration that she had allowed to be scheduled for the same date and location. The counter-demonstration had been organised by the Bulgarian neo-nazi group, The National resistance, who had publicly declared that their intention in demonstrating was ‘to cleanse Sofia from garbage.’ This was a menacing (if unimaginative) statement that was given further weight when I arrived at the parade starting point on Saturday, where heavy police presence was striking.

This was the tenth anniversary of the first ever Sofia pride, when attempted attacks against the 100 plus participants had been widespread. Looking around, it wasn’t hard to see how much the parade had grown over the last ten years, and indeed, the existence of any kind of counter-demonstration was more tangible in circulating rumour than in any visible signs of aggression. Certainly, it was impossible to know that the only thing separating marcher from neo-nazi was the large columned monument to the Soviet Army – stage-right of the Pride DJ who was pumping out classics like ‘I will Survive,’ and ‘I Want Your Love.’ It was hard not to take some pleasure in the fact that the (reportedly paltry) group of neo-nazis was sharing in our sound waves – their ears being buffeted by iconic numbers celebrating love, individuality, sexual diversity and Kikis.

Eventually, the speeches started. Foreign ambassadors from the Netherlands, Brazil and Israel among others lined up on stage in support of the crowd. Notable in her absence was the mayor of Sofia, a fact addressed by the Dutch ambassador to the roars of the crowd. I was told that she has taken great lengths to keep her office decidedly apolitical, but that her achievements in improving Sofia’s infrastructure have made her a difficult figure to hate, even amongst Sofia’s LGBTQI community.

Once the speeches had ended and everybody had had the opportunity to get their fill of rainbow vodka as sponsored by Absolut (cue – heads rolling about the commercialization of Pride), we left Knyazheska Garden and headed out onto the streets where, for the first twenty minutes we marched on without music. In fact, it almost began to seem like music would be superfluous, as everyone appeared to recall the percussional capacity of their own bodies, and rhythms spilled out from hands, chests and mouths. Eventually however, when ‘I Will Survive burst from the speakers the crowd erupted – albeit accompanied by the wry laughter of a few who were marginally less excited to be hearing it for the third time.

In contrast to other Pride Parades that I’ve attended, the crowd in Sofia was heavily reliant on the rainbow flag as the main source of colour, where free rainbow flags that had been given to everyone upon entry to the closed-off meeting point. This was striking in its divergence from say, the New York or London pride where glitter, fishnets or leather are the style du jour, and impressive half-thongs defy gravity by clinging to sculpted bodies. Few were scantily clad in Sofia and few were in costume. Nevertheless, one of the guys I was with had tears in his eyes as we walked down one of the main streets waving our flags and singing and I thought that somehow, this felt like a really big deal.

One of the biggest driving forces of the parade was the support received from old men and women who leaned out of the windows of their apartments to cheer the parade on – in return they were blown kisses from the rapturous crowd. Less inspiring was the presence of a little girl who, perched on her father’s soldiers on the pavement held a sign that read ‘Give the rainbow back to the children, faggots.’ Her age meant that the sign fell short of provoking indignation and most marchers felt only sympathy for her and the unfair indoctrination to which she had been subject.  The sign also led to a brief discussion on gay adoption between myself and one of my companions which ended prematurely with his remark that ‘the nucleur family is a fucking chimera’ before he was drowned out by more cheers.

In total, I think around 2000 people attended the Sofia Pride Parade this year – an ever growing number that attests to a growing tolerance for LGBTQI+ rights but in no way contradicts the fact that there is a very long way to go. Amongst the people I was with, one had a partner who had stayed at home because, being from a small town in the country where homophobia is far more prevalent, he was not ready to be publicly ‘out.’ Another had a partner whose disapproval of the LGBTQI+ community was so strong that she had opted not to tell him how she was planning to attend the parade.

After our circuit, we returned to the park, where we gathered in a circle to dance to the Balkan rhythms of a feminist drumming group called Fambia, or fiesta feminista. From the Bulgarians I was with there emanated a great sense of both gay and national pride. Unfortunately, however, this confluence of pride does not seem to reflect the feelings of the majority of Bulgarians, where recent polls have indicated that as many as 79% of Bulgarians are opposed to same-sex marriage. Indeed, societal intolerance was implicit in the warnings we received throughout the parade, where organisers insisted that flags and wristbands be removed upon exit in order to avoid any cases of aggressions should our attendance at the parade be evident.

As we finished the circuit and were reminded once more to dispose of our rainbows I was reminded of a comment made by one of my companions at the beginning of the march when I had mentioned something about hiding. ‘Hide,’ he said, ‘now you’ve discovered the most important word in the Bulgarian language.’ 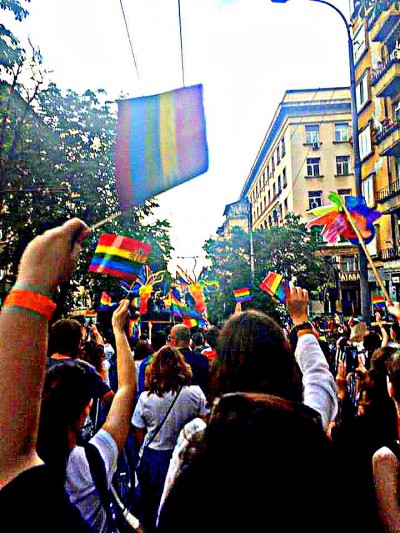