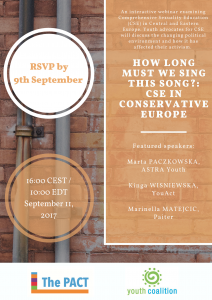 ember 11th, Youth Coalition for Sexual and Reproductive Rights, in collaboration with the PACT organized first webinar in their series on Comprehensive Sexuality Education in Central and Eastern Europe. The speakers discussed the changing political environment in face of raising populism in Poland and how this has affected their activism. Kinga Wisniewska, our new member from Poland, was one of the speakers and contributed to the discusion.

Similarly to Central and Eastern European countries, the sexuality education in Poland is practically non-existent. In 1999, Wychowanie do życia w rodzinie (WDŻWR, Preparation for Family Life), based on ideas of family, marriage and Christian morality was introduced to the school curriculum, reducing the sexuality education to basic anatomical study of the human body and promotion of abstinence. Almost 20 years later, the opponents of CSE in public schools still claim that comprehensive sexuality education would raise the number of illegal abortions, propagate the sexual immorality and promote various “sexual deviations.” And an ardent Catholic who opposes contraception is writing the core curriculum for this class.

Regrettably, lack of CSE in part of the general trend of supressing sexual and reproductive health and rights in the country:  medical providers can still deny women contraceptives, after-pill is available only with doctor’s note, abortion law is one of the tightest in Europe and there are recurring attempts to punish women who do it illegally with jail.

Preparation to the Family life is not obligatory. In its curriculum, Ponton – a group of sexuality educators – found, the word ‘family’ is mentioned 173 times, the word ‘sex’ only 2. Despite the presence in the program of topics such as sexuality, the whole curriculum is centred around pre-imposed values. There is no room for discussion or openness in accepting other life paths than marriage and sex for procreation. Only two gender identities are allowed – male and female, and there is a lot of emphasis on marking differences between them. The curriculum promotes the only legitimate vision of what a healthy society should look like (based on family and values strongly linked to the Catholic worldview) and leaves no room for people who do not fit in the scheme.

For instance, these are some quotes from the controversial Preparation for Family Life textbook from series “Road to Adulthood” edited by Teresa Król:

Poland remains to be at forefront of battle over women’s rights and sexual and reproductive health and rights in general. Last year, only 1098 abortions were performed legally in the country, compared to an estimated 100 000 abortions performed illegally and out of the country (FEDERA’s estimates). In the last months, we have been witnessing attempts to further restrict the current, already very strict, anti-abortion legislation. However, this time the anti-choice groups, with vocal support from the Catholic Church and the ruling party, are not aiming for a total ban of abortion or criminalizing women for the procedures.  They are targeting one of the three legal instances, which allow for a lawful termination of pregnancy – pregnancy with fetal damage.

The sexual and reproductive choices of young people can have a cascading effect on their futures. Adolescent pregnancy, for example, can lead to dropping out from school and youth unemployment. Poor understanding of gender equality can lead to discrimination, ever growing in countries in Central and Eastern Europe. In absence of political will to modernize the SRHRs in Poland and little hope for change in the nearest future, providing the youth with access to judgement-free and scientifically-accurate sexuality education appears to be more important than ever. We must do much more to protect the right of the youth to access CSE content and enable them to protect their health, well-being and dignity.

The second webinar of the series, “Beyond blackboard & chalk: Innovative Knowledge Delivery & Advocacy,” will address that issue. The speakers will delve into new and innovative approaches to advocacy and knowledge delivery on CSE.

This article is written by Kinga Wisniewska, YouAct member from Poland