Step it up for Gender Equality

Home/Uncategorized/Step it up for Gender Equality
Previous Next

Step it up for Gender Equality

In February, YouAct member Laura Cooper Hall has attended “Step it up for Gender Equality – Youth for Gender Equality Forum”, an interactive and inspiring initiative to promote dialogue, exchange, learning and networking for people engaged in promoting gender equality in their daily lives. The event was organised by the Group of the Progressive Alliance of Socialists and Democrats in the European Parliament, in collaboration with the Foundation for European Progressive Studies, PES Women, Young European Socialists, Rainbow Rose and the Global Progressive Forum and took place in Brussels.

An interactive conference, organized under the ALL of US umbrella – “Youth mobilizing for sexual and reproductive health and rights!” took place at the European Parliament and Laura was one of the selected speakers.

“The Youth for Gender Equality Forum, initiated by the Socialists and Democrats, was one of the best opportunities for connecting with other youth working on gender equality within the EU. Hearing their stories and being able to share my own at the All of Us event, in which some of us were chosen to address participants and a few Members of the European Parliament, was inspiring and incredibly motivating, proving that youth around the region are personally invested in improving the status of those treated unequally based on their gender within our countries. It was clear at the event and since that, despite all our different backgrounds, across religion, education, citizenship, we do have a united voice and a united interest in improving gender equality. We all agreed that there is much room for improvement within all our countries, and that in order for there to be progress we must all work together and with each other, rather than against. Spending two days with other youth with this same interest is one that proves the need for our organizations to be doing our work within our own respective focuses, while also the necessity of relying and supporting each other in order for there to be true progress.” – Laura Cooper Hall, YouAct member 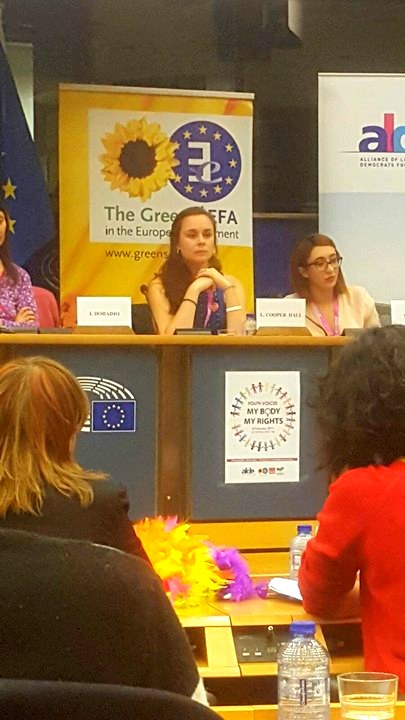