Home/Uncategorized/Story of change
Previous Next

In 2015, Cecilie Morville, YouAct member from Denmark participated in one of the Intergovernmental Negotiations for the new development agenda. Below you can read her story, reflected as a significant change that she undergone. Her story has been gathered with guidance from CHOICE, who started collecting ‘stories of change’ in order to better understand the impact their and their partners’ programs have.

While preparing to go to NYC for the Intergovernmental Negotiations (IGN) in NYC in May 2015 I was a bit nervous. I had been to several UN meetings before, mainly regarding the ICPD Programme of Action so speaking the UN language is not entirely new for me, although it still seems like a foreign language from time to time. While preparing the meeting, I started reflecting on a significant change that has actually happened to me over the last three years, ever since I started doing international SRHR advocacy work. I did not have to sit alone in front of my computer reading documents, but I had become part of a big youth SRHR network, consisting of members and volunteers from several youth SRHR organizations across the world that all were only a click away on Facebook/via e-mail for any questions I might have. I did have a lot of questions to prepare, and they all got answered. After I had discussed some of the upcoming issues for the IGN with my colleagues I packed my bag and took off to NYC.

The Intervention: advocacy at the UN 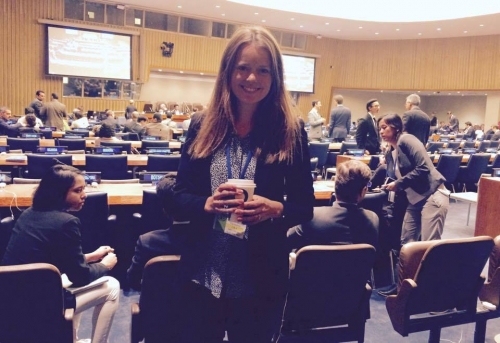 The first day at the UN I was greeted by the Major Group for Children and Youth, who immediately took me in and guided me to the first meeting. It was a jungle throughout the week to learn where to make the best of your time. Before, during and after the main sessions, there would be side events, strategic meetings with different groups and meetings with country delegations. In short, the meeting was about the follow up and review of the post 2015 development agenda, so language and arguments were a bit different than what I’m used to in the SRHR community. The negotiations were getting more and more technical, and unfortunately there were less and less mentions of young people. The talk was basically about the “accountability” of the SDGs – some countries found it to be very problematic to give countries more processes to report on and want to make reporting voluntarily for member states. What the UN Major Group for Children and Youth advocated for, and what YouAct supported, was that we need accountability mechanisms that include legally mandated, well-resourced and specifically designated measures for meaningful and effective youth participation in monitoring and review.

So why was this especially significant? For me it was a great introduction to a broader understanding of the UN mechanisms and furthermore, it was a reaffirmation of the importance of meaningful participation of young people at the UN level. For me, the other young people made a change in both the preparation of the meeting, where my fellow colleagues shared knowledge and best practices, and in the meeting, where we supported each other, not only in strategy meetings but also through social media action during each other’s interventions as a way to reach a broader audience than the few lucky ones present at the meeting. On a broader level, the meeting was significant because countries were mentioning the involvement of civil society and vulnerable groups, including young people, in all levels of the review of the SDGs, which I strongly believe will have a big influence in the impact of the goals in the next 15 years, otherwise, half of the world’s population will be missing from the conversation.