“Finally, advocacy at the UN!” – That’s what I told myself when I got the opportunity to attend the last round of Intergovernmental negotiations. And my enthusiasm was so high because I have been working along fellow advocates for many years, I have attended advocacy trainings and have facilitated some myself, I have contributed to multiple advocacy initiatives and supported young people in developing messages and strategies but all from behind my laptop, while sitting at my desk. But this time, things have been different – I got to be there, at the UN, where Members States negotiate the new development framework that will guide our work in the next 15 years. 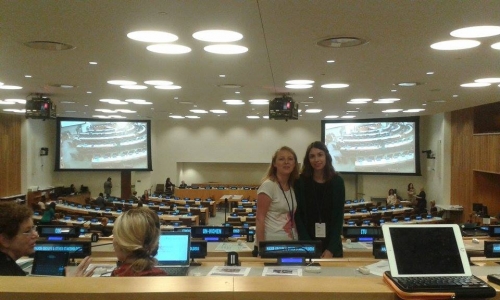 Thorough the 2 weeks, I have attended the intergovernmental negotiations and many side-events and side-meetings, to ensure coordination and joint strategizing with fellow SRHR activists. Meetings with the Women’s Major Group and the Major Group on Children and Youth usually start early in the morning, before the negotiations – and coordinating with them is highly important, as the Major Groups are the main platform for civil society voices in UN processes. Together with colleagues, we have pushed for specific language that guarantees human rights, particularly the sexual and reproductive health and rights of all people everywhere; brings gender equality and women’s rights to the forefront; recognizes young people’s role as key agents of change; and includes the active participation of civil society in shaping global development, both at country and global levels.

I have met and engaged in dialogue my country’s representative (Romania) and I have joined colleagues for meetings with the Switzerland, Iceland and Slovenia missions. Along with that, I have been also contributing to and endorsing statements and language suggestions that were presented by fellow advocates in plenary. The impact of civil society advocacy was recognized by the co-facilitators Macharia Kamau and David Donoghue and several Member States, and Amina Mohammed, the Secretary-General’s special advisor on post-2015, thanked civil society for their engagement and particularly recognized CSOs’ technical inputs, indicating a clear mandate for our continued engagement in the process.

My two weeks experience have been quite intense but passed very quickly! Youth-adult partnership and working together proved one more time to be the key principle in our SRHR community and my reflections would not be complete without acknowledging the guidance, inspiration and motivation received from colleagues from ASTRA Youth, Commat, CHOICE for Youth and Sexuality, Espolea, Family Care International, Rutgers, RFSU – Swedish Association for Sexuality Education, Sex & Samfund – Danish Family Planning Association, Youth Coalition for Sexual and Reproductive Rights and the support of UNFPA.