A March for Choice

Home/Uncategorized/A March for Choice
Previous Next

A March for Choice

This Monday, the 28th of September, was Abortion Rights Day, a day that is incredibly needed currently in our world. We need to talk about abortion – the accessible and the non-accessible. It is essential that we erase the stigma on abortions, bust myths about abortions and increase the access to safe and legal abortions.

There is a myth stating that abortion will not exist as long as it is illegal. But this is not the case. The reality is that instead of having the medical care that a person needs for a safe abortion, that person with the unwanted pregnancy may try to have an unsafe abortion. In 2012 around 7 million women were treated for complications related to unsafe abortion. Even thou it has been recognized for a long time now that unsafe abortions can lead to maternal mortality and morbidity. Uruguay is one example, where the maternal mortality has dropped to the lowest in Latin America by giving Adolescents and Women access to safe and legal abortion. It has been said so many times before me but I don’t see the question become more irrelevant: It’s not about whether or not there is an abortion, but about how the abortion is proceeded.

This weekend I was in Dublin and attended the March for Choice. The march is an initiative from the Abortion Rights Campaign and we demonstrated for the legalization of abortion in Ireland. Today Ireland is one of three countries in Europe where it is still illegal to have an abortion; the other two are Poland and Malta.

On top of marching together with over the amazing number of ten thousand other Pro-Choicers, I met Nessa Childers and Marie Arena, both Members of European Parliament, former Member of European Parliament Zita Gurmaiand and Spanish Pro-Choice activists to discuss the issue. When we started to talk about abortion the discussion went on from one issue to another and we always came back to the most fundamental: Women’s Rights. How important it is that we as Women and Feminists protect and strengthen each other. I, personally, do not think there was enough emphasis on this point. Regardless of what issue on Adolescents and Women’s Rights, and especially on Reproductive Rights, we need to raise our voices. And we need to do it together. Being in Dublin this weekend and demonstrating for Women and Trans-men’s Right to legal abortion was a gesture in solidarity. To raise my voice for their right. 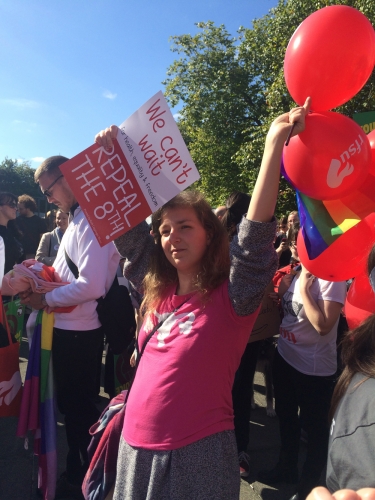 As for me, a woman who lives in Sweden, the question “If” has never occured to me. We have had free, safe and legal abortion for the last 40 years. I’m allowed to have an abortion until the 18th week of pregnancy without any reason; I don’t need a doctor’s approval or even to talk with a therapist afterwards. My biggest concern when I think of having an abortion is who would I bring with me? My mother, my best friend or the father? For that I’m forever grateful for all the women and persons who fought for the right to Abortion in Sweden. For not letting me worry about neither the question “if” or “how” and letting it be absolutely my choice.

So now, on this day and every day to come, we need to work together for everybody’s Reproductive Right. So that one day we have granddaughters all over the world who will be thankful to the past generations for taking on the fight of erasing the questions of “if” and their Right to choose how.