YouAct attended the UN Post-2015 negotiations on developing new Sustainable Development Goals (SDGs) to replace the Millennium Development Goals (MDGs) from September 2015. YouAct was in New York for this round of intergovernmental negotiations with our newest member: Frederik Felding from Denmark. Along with his studies, Frederik has been following the negotiations on the SDGs for a year and sees the new goals and targets as one of the most transformative agendas coming out of the UN in years.

YouAct was involved in this round of the negotiations working with UNFPA, different national missions to the UN and a range of other civil society organizations. The Action Campaign for sexual and reproductive health rights was kicked off just before the negotiations, with YouAct taking part in the strategy session on the campaign.

The biggest news coming out of this round of negotiations running from March 23rd to the 27th – the certainty that the proposed 17 Goals and 169 Targets will be the new SDGs. Negotiators from the Global South have in particular been constantly emphasizing that nothing can be changed and the Global North have to a large degree been agreeing with the exception of a few technical improvements. 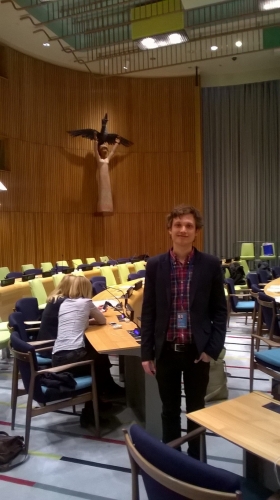 The main discussion of the March negotiations was on indicators and targets. Global indicators, to measure each target, will be developed by United Nations Statistical Commission as countries agreed it’s a technical process. This will go on throughout the next year in a member-state led expert committee. The opportunities for civil society to participate are still unsure and YouAct has asked after this on several occasions. The development of both global and later national indicators is an opportunity to bring youth back into the post-2015 agenda. Youth have to a large extent been left out of the proposal on goals and targets.

Countries at the negotiations agree that all indicators need to be disaggregated on sex and age. However YouAct think we should go further and in particular address vulnerable groups of youth in the indicators. Youth should be part of developing the indicators with national statistical offices as well as being a central actor in data gathering. It is crucial that we have indicators measuring qualitative aspects of progress such as youth perception of education and the fulfilment of their basic rights.

At the negotiations in March, countries have been occupied with debating minor improvements of targets instead of making real progress on the agenda. It’s been unfortunate to see but encouraging that all goals and targets from the Open Working Group are still on the table. YouAct will continue to work on keeping these in the document.