How will we continue working with the post-2015 process?

Home/Uncategorized/How will we continue working with the post-2015 process?
Previous Next

How will we continue working with the post-2015 process?

This January, around 40 organizations from all over the globe met in Oslo to develop a campaign, aimed to raise awareness on youth rights to sexual reproductive health and rights (SRHR) in the post-2015 agenda. The meeting was founded by NORAD, UNAIDS, International Women’s Health Coalition, The Pact and Restless Development. The main question we addressed at the meeting was “How do we secure youth SRHR in the post-2015 agenda, both at UN level but also at country level?”

The campaign builds on ACT!2015, a movement that is supporting ten key countries to ensure commitment to SRHR, harm reduction services and ending the AIDS epidemic. This social media campaign we founded in Oslo is trying to broaden the initiative to a global movement, making member states to commit to young people’s SRHR and youth friendly HIV responses in the post-2015 agenda. 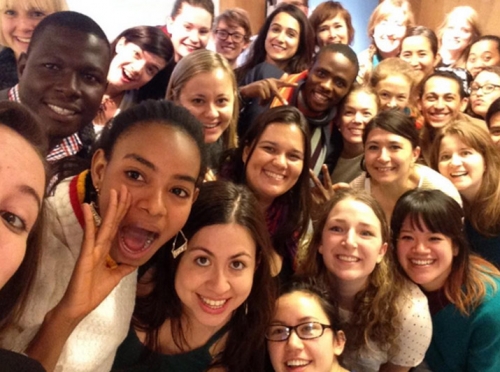 The meeting lasted three days, from the 27th until the 29th of January. The meeting opened with a speech from Malayah Harper, Chief of gender equality and diversity division at UNAIDS. In her speech, she underlined what Ban Ki Moon wrote in the synthesis report:

“Young people will be the torch bearers of the next sustainable development agenda through 2030. We must ensure that this transition, while protecting the planet, leaves no one behind.”*

So, with the tough that youth are the torch bearers for the post-2015 agenda, we started this meeting with a positive attitude! During the three days we learnt about the post-2015 process, its key milestones, and how to advocate and make our voice heard.

During the first day we shared thoughts on how to work together and what our expectations and objectives were. With that in mind, we started the first session where UNAIDS, International Women’s Health Coalition and the Norwegian Ministry of Foreign Affairs shared their view on how to advocate for advancing SRHR in the final phase of the post-2015 process and in the second session we discussed how to build a campaign and also the civil society’s role in achieving set SRHR priorities, from what we learnt from the first session.

The second day we tried to get a shared understanding of how to influence the process from now until September, when the post-2015 agenda will be adopted. We started with a mapping of networks on different levels: global, regional and national and then we tried to figure out some of the work means for the social media campaign. During the second day’s session we tried to create an understanding about what is important to target in the post-2015 process.

During the last day, the youth coordinator at UNAIDS in Geneva, Mikaela Hildebrand, presented the conclusion of the first two days: the campaign will raise awareness among youth about the post-2015 agenda and how they can make an impact, resulting in youth-led implementation activities in countries for the right to comprehensive sexual education and youth friendly health services within the post-2015 framework. The main goal is to make decision makers commit to ensure sexual and reproductive health for youth around the globe.

So, from that conclusion, Restless Development is building a worldwide social media campaign raising awareness among youth about our right to comprehensive sexual education and youth-friendly health services and how we can require that member states and UN secure the sexual and reproductive health targets in the post 2015-agenda and also advocate for both those things when it comes to implementation in countries around the globe.