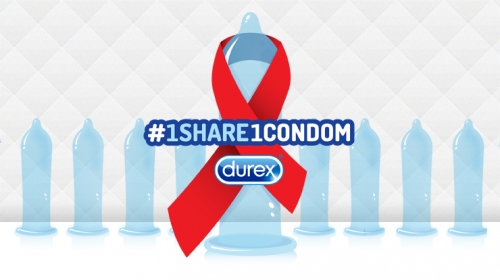 For World AIDS Day (1 December 2012), Durex is launching #1share1condom a global social media campaign to raise awareness about HIV. For each person sharing a message about HIV and prevention, Durex will donate a condom to HIV prevention programmes across the world.

Young people can take part by sharing information about HIV on Twitter and Facebook and Renren; Durex is pledging to donate a condom on behalf of every person who gets involved.

Participants can simply share a message about HIV using the Twitter hash tag #1share1condom or share the Durex World Aids Day images on Durex Facebook pages to their wall and a Durex condom will automatically be donated.

Even after many years in the fight against HIV and AIDS, the transmission of HIV is still a global issue. According to UNAIDS, 2.5 million people were newly-infected with HIV last year and Durex has symbolically set its condom donation target at 2.5 million which it hopes to reach by the end of World AIDS Day

Durex is working together with HIV prevention organisations globally to help create an HIV‐free generation and the Durex condoms will be donated to global and local charities involved in HIV prevention and education projects in more than 40 countries around the world.

The brand believes that encouraging global communication of information about HIV and how it can be prevented, combined with equipping key prevention programmes globally with quality condoms, will help to bring the goal of an HIV-free generation a step closer.